Asuka 120% Limited was a 1997 fighting game for the Sega Saturn, the final1 game in a long-running series. The Asuka 120% games were always underdog favourites of mine; despite looking like throwaway anime fan-pandering, they were surprisingly deep, innovative games with unique mechanics that paved the way for later, more famous games like Guilty Gear and X-Men vs Street Fighter.

In 1999, an unofficial mod titled Asuka 120% Limit Over was released. Rumoured to have been made by the original developers, Limit Over is a surprisingly polished update with many refinements and new gameplay mechanics. It went ignored by the English internet for many years, until the patch was discovered in 2007 by Lost Levels forum posters; it’s now also circulating as a prepatched ISO.

Even though there isn’t much text, Limit Over is hard to play without knowing Japanese, so I’ve prepared a translation patch. 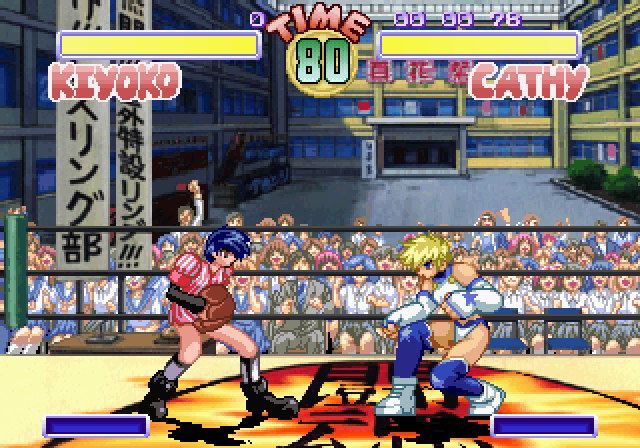 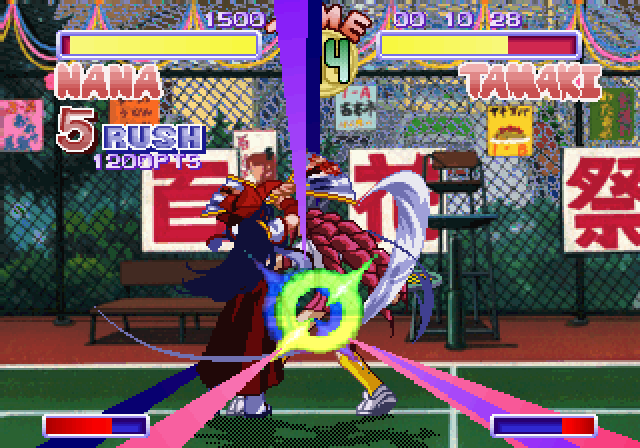 This patch is compatible with the final release of Limit Over for the Saturn2. In order to use it, you need to have already built or obtained a disc image of Limit Over. The patch includes two options: a PPF disc image patch, or individual patches for each file on the disc that was changed. Detailed installation instructions are included in the ZIP file.

For more on what’s been translated, and how it was done, read on.

Limit Over contains very little text, almost all of it in English. Unfortunately, though, one critical thing is in Japanese: the character names. Since the barebones menus have no graphics, not even character portraits, it’s very difficult to actually play without knowing Japanese. Have any idea who you’re picking in the screenshot below? I don’t… 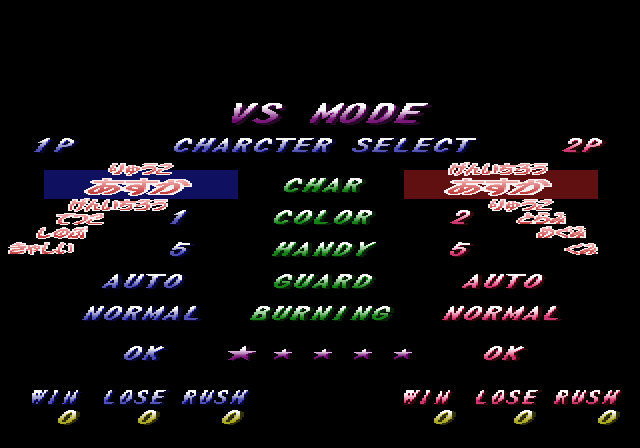 A few other minor bits of text are stored in Japanese: the “N characters beaten” text in ranking and deathmatch modes, and the round start and round end graphics. Their meaning is obvious without being able to read them, however, so I decided to leave them alone.

Like most games of this era, Asuka 120%’s graphics are stored as sets of fixed-size tiles with a set, non-true colour palette. Since these are generally stored as raw pixel data without any form of header, it can be tricky to figure out where the tiles are and how they’re stored; fortunately, however, there are many good tile editors available that simplify the task.

I used a free Windows tile editor called Crystal Tile 2, pictured above, which has some very useful features, including presets for a large number of common tile formats, support for arbitrary tile size, and the ability to import and export tiles to PNG. 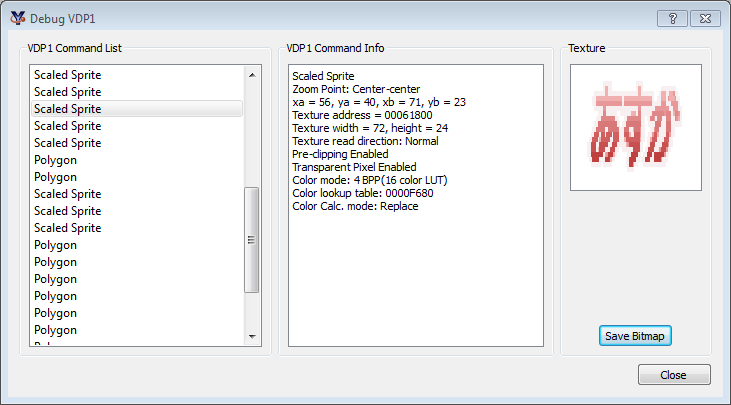 Via trial and error, and with help from information gleaned via the Yabause emulator’s debug mode, pictured right, I was able to locate three copies of the character name tiles in the TTLDAT.SSP3, V_GAGE.SSP and VS_SPR.SSP files. The latter two files are used to store the in-battle user interface and the menus, respectively.

Each character name is a 4 bits per pixel 72x244 tile and, fortunately, Crystal Tile’s “N64/MD 4bpp” preset supports them perfectly. After configuring the palette in Crystal Tile I exported every name to a set of 13 PNG files, like the tile to the left.

I redrew the text using a highly-edited version of a font lovingly stolen from the Neo-Geo game Pochi & Nyaa. Compared to other fonts I looked at, it had the advantage of being both attractive and variable-width—which is important since the English names (which take up at least twice as many characters as the original Japanese) were very hard to fit in a width of 72 pixels. I also expanded the size of the characters compared to the original.

I briefly experimented with a thin variation of the character names for use in the game’s menus, but abandoned it after determining legibility was poor; the menus are 480i, and the flicker inherent in an interlaced image on a CRT or a deinterlaced image rendered the thinner lines harder to read than necessary. To the right are the thick and thin variations of the main character’s name.

The rest of the game’s menu text is stored as ASCII strings in the main executable, and is completely in English. I did, however, make several changes to the character names displayed during loading screens. The one American character’s name, Cathy, was misromanized as “Cachy”. This is an easy mistake to make, since her name was rendered in Japanese as “きゃしい” (Kyashii)5. I also changed the romanization of several characters' names from Kunrei-shiki (Sinobu, Tetuko, Genitiro) to the more familiar Hepburn (Shinobu, Tetsuko, Genichirou).

What’s new in Limit Over?

It’s been many years since I’ve played Limited, so this list is based on my imperfect memory.